When most farmers think about the SoilWarrior system, terms like strip-till, fertilizer placement, soil health and heavy-duty construction probably come to mind. Not many may think about it as a way to apply cover crops or plant soybeans, but that’s just what some SoilWarrior owners are doing.

Those familiar with Environmental Tillage Systems (ETS) and its drive to defend the land and lead the charge may not find it surprising that the company and its customers are finding ways to make the system more versatile. Afterall, the business was built around unconventional thinking. What you may find intriguing is how they’re doing it to determine if it’s something that could be a good fit your operation too.

Mac Ferguson may be relatively new to strip-till, but he’s been seeding cover crops after vegetable harvest since the 1980s. He added them to corn and soybean acres in the mid 1990s.

“For as long as I can remember we’ve broadcast double cut red clover into wheat in February or March,” said Ferguson, who farms 7 miles north of Lake Erie at St. Thomas, Ontario.  On early harvest vegetable fields not going into wheat they use a JD 1990 air seeder to drill twin rows of oats, clover, tillage radish and sunflower. Depending on rotational considerations, they apply oats or wheat on corn and soybean acres. “In the past we’ve grown wheat seed which precludes us from using rye on most fields. We plan to transition away from seed production so that cereal rye can be added to our cover crop tool kit.”

Prior to purchasing a SoilWarrior in 2017 they broadcast their fertilizer and cover crops. They used to broadcast cover crop at 30 feet, fertilizer at 50 feet and ran a coulter chisel that was 21 feet wide.  All separate passes with different equipment.

“Our switch to strip-till and the SoilWarrior purchase was very intentional,” said Ferguson who uses it on about 85% of the farm acres. “We wanted to reduce passes across the field. With this system we have one skilled operator doing tillage, applying fertilizer and cover crops in 40 foot swaths. That’s made a huge impact on our ROI by reducing labor, fuel consumption and depreciation.”

He uses a cover crop kit developed by ETS to blow the seeds between the strips at a rate of 20 lbs per acre. The seed is loaded into one of the fertilizer tanks with tubes connecting its metering system to each of the row units. The tubes can be adjusted to apply in the zone, between the zone or both.

“By the time we’re ready to plant there’s a nice amount of green cover on the field,” said Ferguson. “While it’s not a diverse mix we’ve definitely noticed a healthier soil which is softer in the spring and not prone to crusting, additionally we see reduced weed pressure and less erosion.” 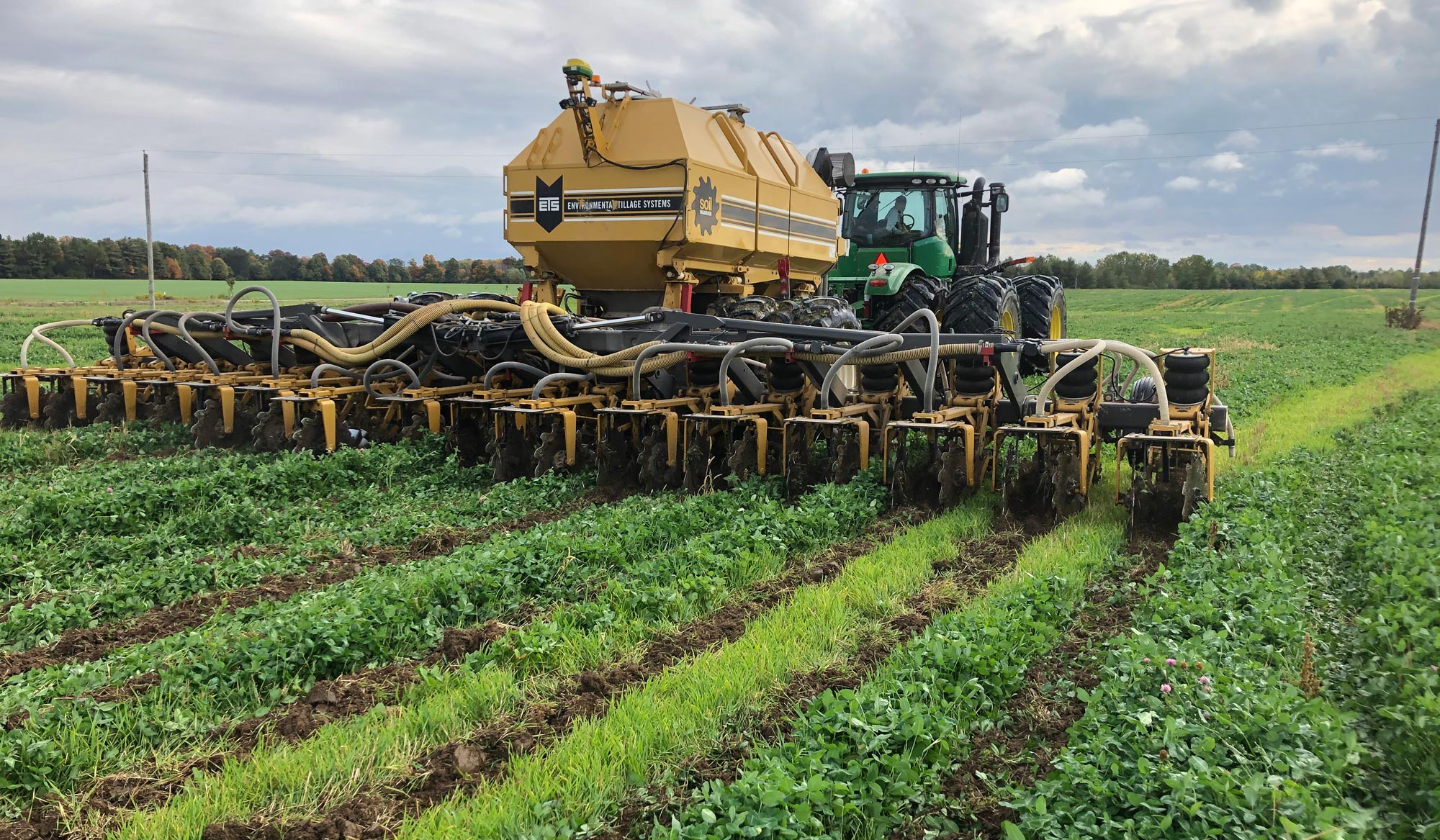 Dan Hanson is another conventional tillage convert who is often looking for new things to try on his farm. Three years ago, he tested strip-till with the SoilWarrior on some acres. Two years ago, he decided to attempt planting soybeans with the system. Both have yielded great results so far.

Hanson grows corn and soybeans in central Iowa with the help of one of his sons. It’s the same heavy soil his father, grandfather and great-grandfather farmed, and he wants to keep it healthy and productive for future generations.

“It’s good soil but turns into a brick with enough moisture or field traffic,” said Hanson. “The SoilWarrior really helps break it up and create an ideal seedbed for planting. I’ve been pleased with it from the start.”

The Hansons strip-till in the spring, giving them the perfect opportunity to plant in one pass. The most difficult part that first season was getting the seed into the SoilWarrior tanks since typical augers don’t quite reach the top. Their seed salesman had to use a weigh wagon with a belt auger to load the seed inside. Now they have a customized auger system of their own.

“We use the scales on the fertilizer tanks to weigh the seed and determine how much we need per tank based on the population per acre,” explained Hanson. “After two years of research and testing populations from 70K to 186K per acre, we’ve determined that a range of 100K-120K is the sweet spot. That gives us 90K to 100K plant stands per acre without overspending on seed.”

Other important things he’s learned in the process involve seed flow, planting depth and seed to soil contact. Since treated seeds are sticky, they mix them with talc powder before loading the tanks. That way the seeds roll in and out smoothly.

While the SoilWarrior is equipped with airbags to control tillage depth, it cannot control planting depth. Some seeds go in 2 to 3 inches and others stay on top of the soil. Hanson has discovered that it doesn’t really matter where the seeds land as long as there’s good seed to soil contact.

Most of the time the seeds germinate naturally, but he’s working with the ETS team to develop a solution that could help ensure seeds get the best start no matter where they land.

While Hanson is pleased with his soybean yields using this method, he’d like to get at least three years of testing it under his belt before feeling confident in the results. He also cautions growers against thinking this is a way to dramatically increase yields.

“You shouldn’t expect big yield increases. While we’ve seen some of our best soybean yields on strip-tilled ground, most of the time our yields are comparable to when we used conventional tillage,” said Hanson. “The true wow factor comes from making fewer passes across the field. It saves us time, money and helps reduce opportunities for compaction, which keeps our soil healthy and productive for the future.”

Are you interested in learning more about how the SoilWarrior can be used to improve your ROI? Download our free eBook to read more success stories and get expert tips.

The more Iowa farmer Ben Pederson hears about the use of cover crops, the more convinced he is that it was the right addition to his current cropping...
Read More
Read full post: ETS Welcomes New Service Technician, Greg Nielsen
September 22, 2021

Greg Nielsen has joined the team at Environmental Tillage Systems (ETS) as a Service Technician. In this role, he will continue to grow the company’s...
Read More
Read full post: Get Your SoilWarrior Field-Ready with These Simple Steps
September 22, 2021

Get Your SoilWarrior Field-Ready with These Simple Steps

Technology doesn’t have to be your enemy. Conducting pre-season technology checks can save you time when it's “go time”. ETS Precision Ag Specialist,...
Read More