A brother and father team from Central Missouri start a path for others to start using strip-till in Missouri. The Kliethermeses, CADA Farms, grow primarily corn and soybeans; and have been incorporating cover crops into their system for over seven years. As independent turkey producers, they have integrated a feed mill into their farming operation. A crop acreage challenge for them is their terraced ground which means erosion is a larger concern. They have been able to use turkey manure from their farm as a fertilizer source for many years. Soil tests show that the crops need certain nutrients in addition to the manure fertilizer.

Taking the leap to move toward no-till was not an easy decision, but soil erosion after hard rains weighed heavy on the brothers’ minds. CADA Farms moved to a vertical tillage operation prior to 2010 and experimented with brands and concepts. The issues they struggled with were preparing a consistent seed bed, minimizing soil disturbance, and combating slab effect in the heavy clay Missouri soil.

Their journey began by adding cover crops. Moving away from vertical tillage was important to retain topsoil, and the next decision was to buy a minimal tillage or field cultivator unit for seed bed prep. The appeal of a minimal tillage system was that it allowed for both erosion control and concentrated fertilizer application. 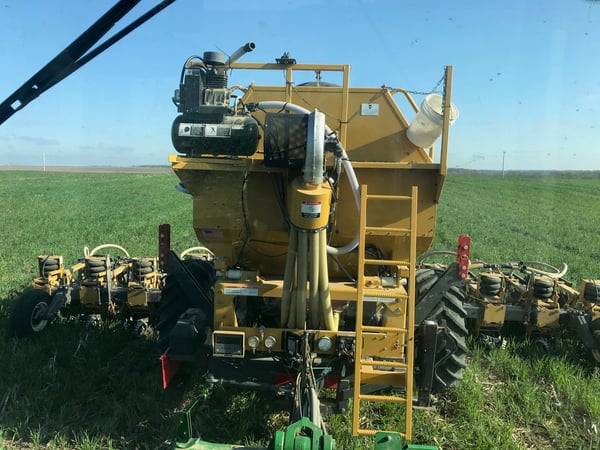 CADA Farms strip-tilling into cereal rye grass with a SoilWarrior.

“The idea was for cost savings from both fertilizer and one less trip across the field,” brother Brandon said. “In 2016, I began to research the idea of strip-till since we already had RTK. In 2007 and 2008 we applied NH3 with a shank machine and planted directly over the knife path with the planter. We found that during heavy rains, water would follow the knife path and blow out the seed trench.” Brandon continued, “In this regard we wanted to stay away from a knife row unit. I spent some time trying to figure out what brand would be best and talked to a few strip-tillers that used both knife and shank machines.”

Given the planting pattern and equipment available on the farm, Brandon looked for a company that offered a demo unit as this was a major financial decision. The SoilWarrior Rental Program caught his attention and in 2017, CADA Farms welcomed their first strip-till machine to their farming arsenal. “The SoilWarrior marketing team worked with our farm to meet our operation’s needs (renting the machine), so we could feel comfortable making a purchase later,” said Brandon.

A few challenges for the farm included on-farm fertilizer storage as the family relies on fertilizer from a local supplier to fill the SoilWarrior. Another challenge was finding the right application rate for fertilizer and other nutrients. It is important to understand that fertilizer quality is key, and dust and chunks of product are not conducive to even application and good use of the SoilWarrior. The next challenge is implement row width. The CADA Farms SoilWarrior has 12 rows while the planter has 16 rows and neither have implement guidance. End rows present a problem. On field edges or curves, the planter will move off the strip or to the edge of the strip. Lastly, the weight of the machine in the spring can be troublesome. In a few words, 2018 was extremely stressful. Brandon noted, “We do struggle with ribboning in our clays soils, but with every season you gain insight in tweaks to help set the machine to handle those conditions.”

The 4Rs of Nutrient Stewardship

CADA Farms continues to see benefits of using the SoilWarrior. First, erosion control. The family strip-tills in the spring since they farm over the terraces ahead of the planter because 100% of the corn crop is side-dressed. Second, an appeal for new strip-tillers, due to the precision placement of fertilizer and nutrients, they have been able to reduce their fertilizer rates by 20-24% and have seen an increase in plant nutrient uptake compared to the full broadcast rate. The fertilizer cost savings assists in paying for the machine. Third, they have seen stands increase for both corn and soybeans on the strip-tilled acreage. Overall, CADA Farms have cut back on fertilizer rates and increased plant uptake by focusing on nutrition in the row. “Strip till has also allowed us to make changes to our nutrient cocktail for the various crops,” said Brandon.

The family found it important to invest in a fertilizer tender and a good row blockage monitor. They were able to adapt an air delivery system on the SoilWarrior to help clear application lines when filling the fertilizer box. “The SoilWarrior is extremely versatile when it comes to varying soil conditions,” said Brandon. “Take the time to understand how to make those adjustments for a better strip.”

CADA Farm’s advice for new strip-tillers is to overcome investment costs. “Although you see other farmers raising great crops using conventional tillage, it is worth taking the time to become a strip tiller and learn to farm smarter,” Brandon advised. The brothers suggest paying more attention to detail to fertilizer delivery across the machine versus a broadcast application. Brandon said, “It has helped me accomplish my goal of limiting soil erosion, increasing nutrient uptake, and allows huge opportunity to think beyond just NPK.” While ETS is based out of southern Minnesota, Brandon remarked, “It has been extremely good to work with parts and services given the distance to ETS. Their service team is always quick to return phone calls and provide the support needed on the farm.”

Ready to Transition to Strip-Till? Talk to Our Sales Team.