Harvest is more than just a time for hard work, it's also an opportunity to be thankful for the blessings in our lives. We have a lot to be grateful for at ETS. At the top of the list are our customers who are defending the land and leading the charge. We'd like to introduce you to a few of them. Today we're in Iowa with Mark Thompson.

Mark Thompson got an early introduction to conservation tillage. The north central Iowa farmer started farming with his grandfather back in 1983 while still in high school. Even then his farming focus was different than most.

For the past 15 years, Thompson has strip-tilled his 1,200 acres north of Fort Dodge, Iowa. He grows primarily continuous corn, but does rotate in some soybeans. The heavy amount of residue left because of continuous corn can be a challenge for farmers practicing conservation tillage. Thompson says he tried several different machines before switching to the SoilWarrior. He now runs an 8-row unit that handles his one pass approach and provides a good seed bed for the coming spring.

“I strip it, plant it, spray it and harvest it,” Thompson says. “Most people don’t believe that I can do it that way.”

In addition to farming, Thompson works in farm and crop management with Sunderman Farm Management Company. The simplicity of zone-till farming and the effectiveness of the SoilWarrior made economic sense for his situation.

“I work fulltime and the system eliminates recreational tillage,” Thompson says. “Plus it’s more efficient with nutrient placement and it supports conservation.”

Because he works with as many as 90 other farm units, Thompson knows first-hand what yields and cost of production are for farmers in the area. He’ll willingly put his strip-till system up against any others out there.

“Our yields match what’s out there and our cost of production is lower than most,” Thompson adds.

The economics aren’t the only thing tilted in his favor. Thompson says his soils have never been better.

“Since I’ve started strip-till, there’s been a dramatic change in soil health. It’s so different than what it was,” he says.

While he’s only used the SoilWarrior for about a year, he couldn’t be happier with the system because it handles the heavy residue from continuous corn and it makes a good seed bed. He has been impressed with the Environmental Tillage Systems (ETS) staff and customer service. Thompson also appreciated the one-day operator training session ETS held before the National Strip-Tillage Conference.

The combination of a quality product and top-notch customer service has the Iowa farmer very pleased with his decision to choose a SoilWarrior.

“My soil is healthy, the yields are good and I’m seeing cost savings. That makes sense to me,” he says.

Ready to start saving money, time, and your soil?

Test drive a SoilWarrior on your farm this fall. 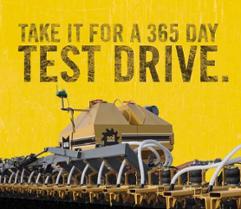 Farmers in the U.S. and Canada have successfully used the SoilWarrior for years to grow healthy, productive crops while protecting their soil. But...
Read More
Read full post: Managing Residue in Strip-Tillage
October 14, 2015